The Basketball Skills event includes competition in three drills: controlled dribbling, passing, and shooting. The dribbling event is timed and athletes must follow a line demonstrating ability for controlled dribbling. The passing event consists of passing the ball against a square on the wall and points are awarded for each time they hit inside the square. The shooting competition includes shooting from 6 different spots within the free throw lane and points are awarded for each basket.

“Our athletes competed well at both the district and state level this year”, said Sara Wolthuizen, Panthers Coach. “They have been practicing their basketball skills since December and their hard work showed at the state competition.”

The Basketball Skills competition with Special Olympics allows individuals to have a different opportunity to participate in basketball outside of the regular basketball game/team competition. “It’s fun to see them compete against others at the state level and to watch their individual growth and success as they develop”, says Deb Middle, Panthers Coach.

In 2017, Village Northwest Unlimited sent 17 athletes to the district competition and of those, three moved on to state competition. There are age categories for individuals ages 8 - 51+ years old. 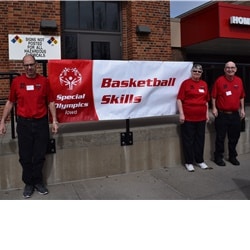